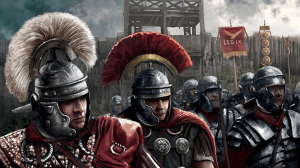 The life of a legionary sounds exciting, dashing perhaps. Even today there is a mystique and sense of excitement surrounding the Roman legions of the ancient world. Many roman youths thought so too and willingly volunteered for service, others used it as an opportunity to escape the slums and crushing poverty of the cities, some were even condemned to service for petty crimes. The simple truth was that a hard and difficult life waited for all who served with the legions. The life of the legionary was far from dashing. Excitement, in the form of a fight, was something nearly every legionary wished to put off but could never truly avoid.

The lives of legionaries were pretty regimented and rather boring by nature. They saw near daily drilling and training, supplemented with all kinds of backbreaking labor and duties. Drill could be quite brutal, seeing everything from minor wounds, to contusions and numerous blisters on the hands and feet alike. Chafing from armor was a constant problem and irritant.

The legions regularly trained their men to exhaustion and frequently continued beyond that point. Combine that with harsh unbending discipline and you produced one fine soldier willing to put up with incredible hardships, particularly when it mattered on the battlefield. It was sometimes joked that the real difference between drill and battles was that in battles there was simply more blood.

Legions typically had qualified engineers attached and as such were capable of building a wide variety of structures. Outside of drill and the occasional route march, examples of work could involve fortification/fort and general construction duties. Legionaries could also expect to be involved in road construction and infrastructure maintenance. One of the primary reasons for roman road construction was to make it easier for the legions to move rapidly about when needed. Should the Legate desire it, even assisting the local harvest of crops was not beyond the duties of a legionary. (Translation: the Legate was paid to loan out his men as a cheap source of labor)

Most of the time, it was drill, work, drill some more, stand your watch and then enjoy a nice watered down and heated jar of cheap wine with your comrades. (simplifying here but pretty close) If you were under punishment detail, then the legionary could expect to be knee deep, shoveling out the latrines and living on a diet of barley and water, making frequent visits back to those very same latrines he just cleaned out. Sounds rather fun doesn’t it? A real dashing life…

The legions went where they were ordered. Legionaries left the politics up to the politicians. Questions of right or wrong, righteous cause or not rarely if ever made it into their calculus. They were professional soldiers and were there for a reason, whether it was to put down a rebellion, invade some foreign land, repel an invasion, act as a deterrent or provide security for a province.

I’ve heard it said and argued that the legionaries believed that when Rome invaded a land they did so with the understanding that they were bringing civilization to the barbarians. This is a distinct possibility and likely entered into their thinking… though to be honest I don’t think the average legionary gave it too much thought. The grunts were more concerned with their (not in any particular order) salary, ability to regularly visit a prostitute among the camp followers, tending to their informal family (again amongst the camp followers… if they had one… they were usually not permitted to marry… hence the informal part), having a customary drink(s), increasing their pension, loot and making it through their required term of service to retirement, where having made something of themselves they could finally settle down and enjoy life.

Battle in the ancient world was a terrifying experience and in a number of provinces a very infrequent occurrence. For hours on end, a legionary could be expected to preform extremely gruesome work. Battlefields were filled with screaming, yelling, the cries of the wounded, rattle of armor, sound of sword on shield, shield on shield, or a mix, horns blaring… essentially think of the worst possible cacophony of noise, throw in no little amount of terror and you are pretty close.

The average legionary, in the midst of battle, generally had no idea how the battle as a whole was going. Sometimes the general did not even know. Battles were confusing to the extreme. The larger the battle the greater the confusion. The side that was the better trained, organized and disciplined generally held an advantage. (Please note: I am not omitting/excluding a discussion on morale, but saving the subject for a later blog.)

The real killing typically began when one side broke. Gruesome cannot adequately describe what occurred on the ancient battlefield. In the space of a few hours thousands to tens of thousands could be cut down in a small confined area. For those who lived through it, this was the kind of experience that in today’s modern world would require years of counseling and therapy.

It was this sense of the ancient world… the soldier’s perspective… a small cog in a great machine… the common legionary and the officer who led them, that I tried to bring you… with a touch of realism.