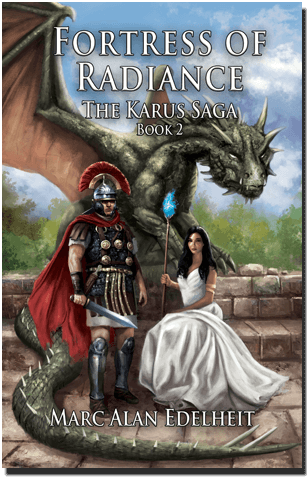 Surrounded by an army of Celts and facing certain destruction, the Ninth Imperial Legion, one of Rome’s most powerful military formations, has been unexpectedly transported to the world of Tannis. The legion, now under the command of Camp Prefect Karus, finds itself lost in a strange land. Cut off from everything they have known, they find temporary shelter in the abandoned city of Carthum.

They quickly learn an unholy army of orcs, goblins, trolls, and humans known as the Horde is on the march, sweeping across the face of Tannis like a dark tide, conquering one land at a time. No force upon this world has been able to withstand the armies of the enemy. Yet the Horde has never met the might of Rome, and Karus means to fight.

In the dungeons under the palace, Amarra, last of the faithful, is found. Together they are visited by Jupiter himself and given a series of dangerous tasks that sets them on the path of destiny. The first is to recover the dread sword Rarokan the Soul Breaker from the Fortress of Radiance. But the sword has a will of its own, and the enemy will stop at nothing to get the dangerous relic.

Aided by the dragons Cyln’phax and Kordem, Karus and Amarra must set out on a perilous journey to the Fortress of Radiance to bring back the dread sword. Should they fail and the enemy get to it first, all will be lost.

If you enjoy an original story, honorable heroes, mind-blowing twists, and page-turning action that puts you right in the middle of the gritty fighting, then you will love Edelheit’s series.