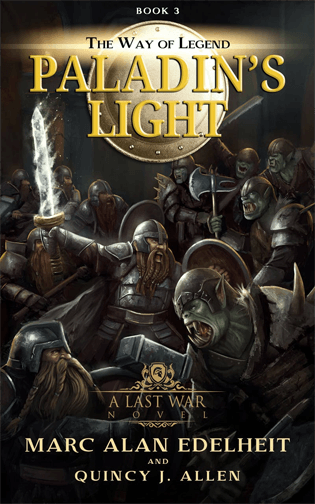 The highly anticipated epic conclusion to the Way of the Legend series is finally here. Marc Alan Edelheit, bestselling and award-winning author of Stiger's Tigers and the Karus Saga, has teamed up with national bestselling author Quincy J. Allen to deliver a blockbuster fantasy adventure told from the perspective of dwarves.

Tovak, a pariah amongst dwarves, an outcast, bears the burden of his people’s disdain and his family’s disgrace. And yet, through many trials and tests, he has managed to stubbornly prove himself in battle time and time again, and shown his courage in selflessly risking life and limb. Though not everyone accepts him, he has been chosen by his god as a holy warrior, a paladin in service to Thulla.

After successfully breaking the enemy’s defenses and forcing their way into the Keelbooth Valley, the Warband is on the cusp of success but is unable to locate their objective, hidden amongst the crumbling ruins of a long-lost civilization. Time is running out. The Horde is on the march and intent upon taking back the valley. A battle will soon be at hand, the likes of which Tovak can hardly imagine.

Tovak is called upon by the warchief to find, locate, and open Grata’Dagoth, a dwarven fortress that guards the Ara’Kasan, an underground road that has the potential to save his people. And though he is a paladin, Tovak does not fully understand his new powers, let alone how to use them. Worse, evil is on the wind, in the form of a dark paladin who is also on the hunt.

Armed with his faith in his god, ample determination, and unquenchable courage, Tovak, along with a handful of companions, soldiers forward, determined to find that which was long lost. The path ahead is not only dangerous, but forces him to face his greatest test yet. Should he fail, it will not only mean his own death, but potentially the end of his people.

Set upon the world of Tannis, some years before the arrival of Karus and the Lost Legio IX, this book is a Last War novel.