The Tiger's Time (Chronicles of An Imperial Legionary Officer Book 4) 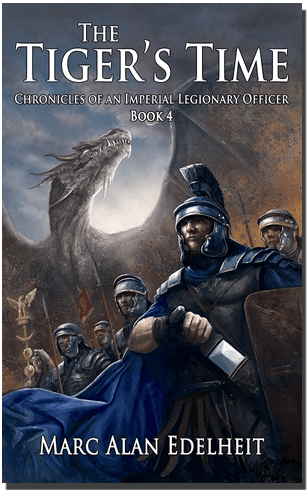 The fourth installment of the award-winning Chronicles of an Imperial Legionary Officer series is here!

A nobleman from an infamous family, imperial legionary officer, and born fighter, Ben Stiger is trapped in the past and cut off from everything he has known. The World Gate is sealed behind him and Delvaris the man he traveled through time to save, is dead. With this great man’s death, the future has been altered by the evil god Castor.

Stiger has lost his purpose. For the first time in a great long while, no one needs saving and no one needs killing. Stiger is a man out of his time and worse a prisoner of the dwarves.

Cast adrift in a time not his own, Stiger believes his time as a leader of men is at an end. But the gods are not done with him yet. A terrible evil looms over the Vrell Valley like a grim shadow. Castor’s dark servants are hard at work. Despite being a man out of his time, Stiger is viewed as a threat to be eliminated, for a dread destiny has been stamped onto his line from the time of Karus.

The Horde is on the march, and the Thirteenth Legion is in Vrell without a legate. There is only one man who can lead the Lost--Stiger. This is the Tiger’s Time! The question is… can the damage done by Castor’s servants be repaired and will it be enough to change his destiny?