There are three series to consider. All are set in the same universe. I began telling Stiger and Eli’s story in the middle years…starting with Stiger’s Tigers, published in 2015. Stiger’s Tigers is a great place to start reading. It was the first work I published and is a grand fantasy epic.

However, if you desire, you can easily start with Stiger, Tales of the Seventh, which covers Stiger’s early years. It begins with Stiger’s first military appointment as a wet-behind-the-ears lieutenant serving in Seventh Company during the very beginning of the war against the Rivan on the frontier. This series will see Stiger cut his teeth and develop into the hard charging leader that fans have grown to love. It will also introduce Eli and cover some of their early adventures. These tales should in no way spoil your experience with Stiger’s Tigers. In fact, I believe they will only enhance it.

The Karus Saga is a whole new adventure set in the same universe…many years before Stiger was even born. This series tells how Roman legions made their way to the world of Istros and the founding of the empire. It is set amidst a war of the gods and is full of action, intrigue, adventure, and mystery. 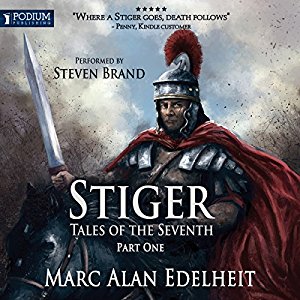 TALES OF THE SEVENTH?

This is a prequel to the Chronicles series, so I don't know why it is referred to as book 4 of that series, which it clearly is not as far as I am concerned. Rather it stands on its own.
It is a good story, and I liked the ending.

To be up front and honest, this is my genre. Romans, conquest, and drinking. That being said, this isn't a classic...it's the book that classics study and then they feel inadequate. I despise the antagonist and I fear for the protagonist. Is it possible for a book to accomplish more?

It's a great prequel, explains some of the things in the earlier books (actual later timeline) that I found interesting. rounds out the character a bit more. it's almost better to read this AFTER you read the Stiger Novels.

This author has great talent. Wonderful characters and plots and storylines. Best read I've had in months. I will be buying this authors other works soon. You will not regret the time you spend with this author. 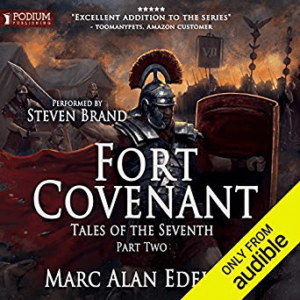 From Newsletter to Novel, Fort Covenant.

Stiger and the remaining members of the Seventh Company are dispatched by General Treim on a secret mission. As they continue, they are slowly cut off from the Third Legion by the Rivan army. Upon rescuing imperial prisoners, Stiger learns of the Rivan's plan which could potentially cripple the Empire. Can Stiger come up with a crafty plan to save the Empire, his men, and Himself?

While I am a voracious reader I seldom write a review. That said this book is one of the few that I would be remiss to not complement the author. I really should say series, because I read both books in this series over a weekend. I find very few books that I just refuse to put down, the two in this series were of that caliber.

Marc Alan Edelheit has done it again. You can start reading this series from Chronicles of an Imperial Legionary Officer, book 1. Or you can start it from Tales of the Seventh. This series is the backstory, which we don't really know the details of, in Chronicles. I'm on book 4 of the other series, and am going to read book 3 of this series soon. The whole series is five stars overall!

A Wonderful Tale of the Seventh.

Let me start by confessing that I am a total fan of the Seventh and Steiger. I read this version chapter by chapter as it was published by Mr. Edelheit and loved it then, so had to purchase the total book to support the author. And to see if any changes were made to the first version. I recommend this for anyone who likes Military fiction with a dash of fantasy. 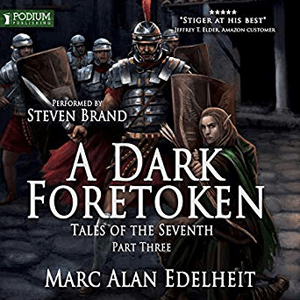 Stiger, Eli and Tiro off on another special mission

Once again Stiger leads his men out on a rather simple mission and finds trouble along the way. At least Eli will be satisfied that hanging around with Ben makes his life "interesting". A good tale with plenty of details to leave you wanting more without too many complications that remain for future books to resolve.

Great addition to the Tales!

Stiger and Eli, accompanied by a Paladin of the High Father, a small number of surviving veterans of the 7th, and saddlebags filled with gold, set off on a secret mission vital to the war effort. The story gives a lot of insight into how Stiger became "a right bastard of a man" and the developing friendship with Eli and others.

I have been suprised by how much I have enjoyed this series and all of the authors books. I find that I cannot put them down and read this latest one in less than 8 hours. the depth and feel that is conveyed immerses the reader into the life and times of a Roman legion

Another fantastic entry into the series to give us some insight into Stiger's early development. I just wish it was longer and had a bit more teeth as this was a bit of an appetizer but still glorious. I love these characters and the world the author has created and I can't wait to read more. 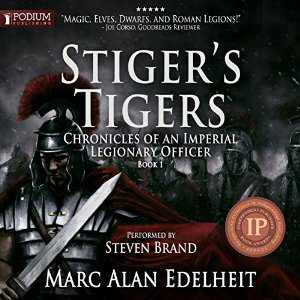 Audible tells me that I've listened to over 350 books over the past 12 months, (have optic neuritis), this book stands simply out over 98% of those books. The plot moves, the characters have appeal, the author seeds hints while weaving his tale and making us invested in Stiger.

Excellent opening to a series

Excellent. It's a string opening to a series. I like the mixture of roman like military with alternate fantasy universe. Great characters. Looking forward to book 2

Love the Stiger series! This is the second book I have read of this series. The great description and fine attention to detail makes you feel like you're actually there. I can't recommend these books enough! Keep up the good work Marc!

I was debating what to read when I remembered that I had bought this story a while ago but hadn't gotten around to listening to it. I'm glad I remembered. The story follows a young captain set in a Roman imperial type world who is sent south to a new command at the edge of the empire fighting a rebellion.

Great new series, combining a fictional Roman war with Fantasy. The first book was good, but a bit slow to develop. The author needed time to develop his characters and kills a few off in the action packed second book.

Great new melding of two of my favorite genres.

As a big fan of Douglas Jackson's "Hero of Rome" etc and the occasional fantasy romp I was pleased with the detailed look at a new concept.. a Roman legionary surrounded by elves, dwarves, and magic!

Really excellent book I can't wait for the next one. Great story I usually don't like magic added in but this was so interesting and very well written. I can't wait to see what is in store for the Tigers.

Kudos to the author. I thoroughly enjoyed this audiobook it was never lagging kept me interested so pleased to have found the series and look forward to the next book again just a wonderful job forgive me for being aggrandizing but this book was excellent. 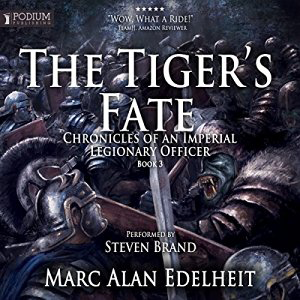 Amazing story with an amazing narrator!

Really glad that I stumbled upon this series. Honestly, the only reason I bought it was because Steven Brand was the narrator.

I have found that each book is better than the one before the last. How it is done is a wonderful thing. If you are a fan or history but like a little of the fantasy thrown in than this is the series for you.

I've both read and listen to this series. You'll find this to be one of the best story lines around. once you start you won't want to stop. Then it stops, no book 4 and now you have to wait...damn

This book was suspenseful in nature. The ending was something I didn't expect whenever I started it, because it really didn't seem like it would end that way. I also expected Stiger to develop a relationship with the elf, in probably the next book. Truly a great ending. 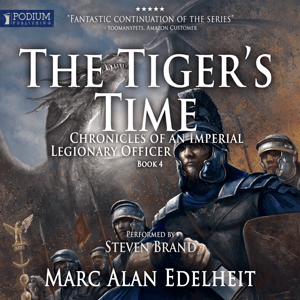 Since this is the 4th book in the series I have to tailor the review with that in mind. To my fellow fans that have read the first 3 I say this....the epic adventure continues and expands in size and scope.

This is a terrific instalment in the series. Some of the early scene-setting seemed drawn out but proved important to the narrative. I love the combat scenes & I can't wait for more involvement from the gnomes.

It's a great book!

This book I have not been able to put down, in the time since I bought the Kindle version, I have spent every available minute reading this book.

Amazing book! Cant wait for the next one!

This book is full of battles, heartbreak, HUGE armies, and all sorts of dwarf, orc, gnome and yes, even some dragon action. This universe has potential everywhere! 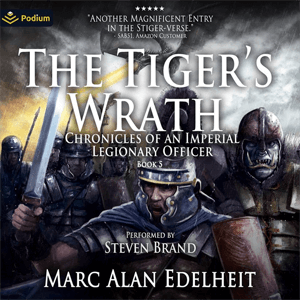 Having had the opportunity to preview this one, I am honored to purchase the final copy. WOW!!! Not only does Stiger return to his own time with LEGIO XIII, he has come with allies.

I hope you weren't planning on sleeping

I have been eager to get any book that MAE publishes. I have never been disappointed. He has a way of bringing these books to life.

The characters are all well written and endearing. The story line over the series is amazing. The only down side to this book is you eventually get to the end and have to wait for the next installment.

A great new story with a big surprise

This work continues as a outstanding adventure in the world of Ben Steiger and his legion. It has the same elements as the previous stories and finishes with a surprise, but satisfying ending.

THE NEW SERIES
(standalone series set in the same universe) 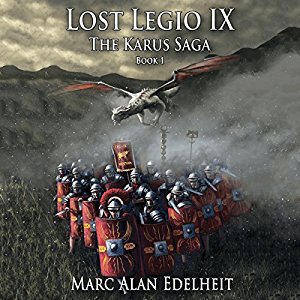 Going to be a Heck of a Series

I generally do not like fantasy, but after being accidentally introduced to the Stiger series, I have come to really enjoy the books. Now, Marc Edelheit has presented us with Book 1 of the prequel series and it looks like it is going to be great fun.

Another great book from one of my favorite authors. I bought the print and audio versions, and I am happy I purchased both of them.

Just what I hoped it to be. Excellent characters and story line. Cannot wait to hear book 2. 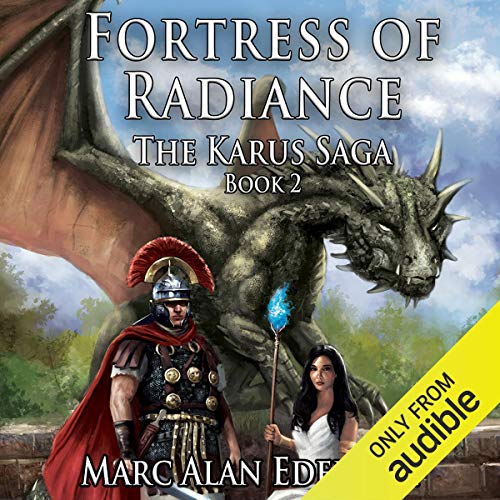 A Roman legion finds its self on another world 🌎 . Working for a god to stop the evil hord from destroying the different races and the planet. Good Dragon s , evil orcs, evil worms (a type of dragon), elves and humans battle it out in this adventure. Very enjoyable story.

I enjoy everything from this author. I can't wait for the next audio book in the series .

Romans and Dragons oh my!

I loved this book! If you like questing, dragons, elves, and a Roman Prefect getting a magic sword then this is your thing!
The story kept non stop action front and center and left you pleading for more. Hurry up next book!